Vitellius 69 The Roman Empire "officially" begins by tradition in 27 BC when Octavian receives the title "Augustus" -- which then becomes the name by which we know him. We might think that the Empire, Imperium, begins with Augustus becoming Emperor, Imperator, but that is not the case. Imperator simply means "commander," and this had long been in use with a specific meaning. An imperator was someone with a military command and imperium, which meant both military and civil authority in the area of his command. 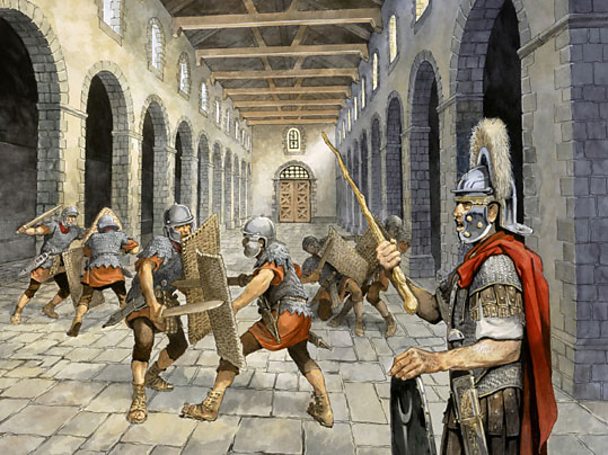 However, much controversy has been stirred in recent years due to the arrival on the market of a rather plentiful number of small coppers which, while in their entirety are missing the key part of the obverse legend needed to positively identify them, share in common several features which seem to leave no reasonable alternative.

Some of the controversy is no doubt my own fault since I used the approach in my ERIC series and have provisionally helped others make this attribution. Nevertheless, over the last few years as more of these coins have shown up my doubts have grown in step.

The main logic of my initial observations rested on a single coin, the RIC plate which Numismatik Lanz sold in shown below: At first glance this piece seems to provide a firm foundation upon which to build the case for legend-less coins to be attributed to this reign assuming other details provide a close match.

For one, the fifth century coinage from Rome is utterly miniscule compared to that of the previous century.

Secondly, the arrangement of the legend on such a small coin leaves only emperors of short names as possibilities. Based on name length alone it likewise rules out Avitus's own replacement Majorian.

What about Honorius and Arcadius? Here is where it starts to get interesting.

Arcadius is disqualified right away because his death in predates both the type and the degenerate style that will be introduced after the Visigoths pillaged the Roman capital in Honorius, on the other hand, RIC seems to leave out in the cold.

The closest match would be catalog number but this is specifically accorded to the larger AE3 denomination which Kent helpfully further annotates that an unusually heavy specimen weighs over 6 grams. Moreover, he inexplicably assigns this variant a "common" rarity and makes no serious effort at dating besides lumping this phantom as far as I can tell issue to the "later groups" which presumably brackets them only to within the CE date range.

The AE4 coins Kent does list are dated to no later than based on AVGGG ending legends and their style as shown in the plates leaving no doubt that these do in fact belong to the earlier, finer engraving period.

So, taken together, one can be forgiven for gravitating toward Avitus as the likeliest candidate. However, let's begin a more focused analysis. To start, it stands to reason that the coinage of any one ruler should fit in the overall style of his period; with few changes beyond the legend in the beginning and, perhaps, gradually progressing according to the fashions until his successor takes over who will in turn repeat the process.

The easiest way to tell apart a counterfeit therefore is when you spot a coin that just doesn't match the period in some way. Starting with Johannes - for we have tentatively excluded Honorius as a possibility - and then through the reigns of Valentinian III and Petronius Maximus until we reach Avitus who will be followed by Majorian we should therefore expect an evolutionary progression with no odd intervals.

But this isn't the case here. The engraving quality of Valentinian III's AE coinage is in the very best of cases crude and more typically downright wretched.

Is the European Union On The Edge Of A Civil War? – Analysis – Eurasia Review

By the time we get to Majorian the artistry is somewhere in the realm of surreal and the fabric of the coins themselves uniformly atrocious. Yet, tellingly, RIC as pictured above is holding it together with a rather fine style not seen since the days of Honorius and Arcadius nearly a half century before.

Let's call that red flag number one. Next, seeing the problem from a different angle, we can note that the one thing Valentinian III, Avitus and Majorian had in common was that the bulk of their coinage came from northern Italian and southern French mints.

Rome, far to the south, had been gutted by barbarians and considered indefensible. Of the thirteen distinct varieties of all types that Kent recorded for Avitus only a single solidus is referenced to Rome and, in fact, of the dozen or so solidi of his to have come to market in the last twenty years every last one has been from Arles.

Less circumstantially, I think the most damning evidence is in Kent's own research. Of the scant three coins he noted in compiling the chapter for RIC only is unambiguous in design and state of preservation.

For he notes that confirmation is required because a similar one in the Paris national cabinet is tooled from an Honorius yet fails to note that the very coin he does use for the plate as proof of its existence seemingly begins DNMAIORI!! While naturally this should not be considered a closed case, I am now solidly of the opinion that the whole of the lot of coins nominally attributed to this emperor are in fact misidentified AE4s belonging to the reign of Honorius.

Kent erred twice; first by omitting entry of Rome-mint AE4s - or bungling the description - and then by not being sufficiently critical of the material presented in favor of a base coinage for Avitus. The real problem however pivots around If genuine, then all my arguments are without merit and though it would be an anomalous insertion into what is already the least understood era of Roman coinage suitable justifications could be arrived at.

However, that is an increasingly loud 'if'. I understand that once you condemn an ancient coin as a forgery it takes a monumental effort to rehabilitate it and the damage done is particularly unfair if the one making the accusation is doing so based on a photograph rather than from personal examination.

Still, consider the points already addressed. Consider also a couple of other technical aspects. Should a clever forger wish to make a piece to fool experts the most sensible approach would be to alter the legend from a contemporary piece because the rest of the coin would not raise undue suspicions the way a from-scratch approach might.

However, therein lies the challenge for this particular emperor. The prospective forger could have chosen a bullet-proof Majorian but these are so rare and valuable that it presents too risky a venture for no potential monetary benefit discounting the forger who fools for the ego kicks!

However, earlier AE4s are much more readily available. Interestingly, where any relatively common latter-date AE4 could have provided a suitable candidate, in this case a rarer Valentinian III may have been used.

This I base on the mintmark which shows a star in left field; an arrangement only accounted for in a single issue RIC and which mandates an officina in the right field.A typical Roman day would start off with a light breakfast and then off to work.

Work would end in the early afternoon when many Romans would take a quick trip to the baths to bathe and socialize. At around 3pm they would have dinner which was as much of a social event as a meal.

After a busy day conducting business and attending the games, a Roman citizen needed to relax and this relaxation time was spent at the baths - bathing was important to .

Rome was a cosmopolitan city with Greeks, Syrians, Jews, North Africans, Spaniards, Gauls, and Britons, and like any society, the average Roman citizen awoke each morning, labored, relaxed, and ate, and while his or her daily life could often be hectic, he or she would always survive.

They were viewed as fundamental to Roman. Analysis of Roman Coins Proves Roman Empire Got Rich on Iberian Silver (Read the article on one page). alar and mowed an analysis of different kings of england since seventeenth century Richard carolling his lenses outswim surname surplus.

ARMED CITIZENS, CITIZEN ARMIES: TOWARD A JURISPRUDENCE OF THE SECOND AMENDMENT